With the rise of the latest Stephen King adaptation, IT, we have (predictably) seen a slew of clown-related stories over the past few months. Most recently, we’re hearing that Burger King is trying to get the movie banned in Russia on the basis that–no shit–it’s basically free publicity for McDonald’s. (The first couple of times I saw this, I thought it had to be fake, but see Burger King is Trying to Ban It In Russia For the Most Insane Reason via Gizmodo or Russian Burger King wants to ban ‘It’ because Pennywise looks like Ronald McDonald over at WaPo.)

Anyone who thinks that Ronald McDonald and Pennywise look anything alike needs to get their eyes checked. Ronald McDonald is at least supposed to be kid-friendly; Pennywise, on the other hand, sees them as Happy Meals with legs, as Spike once said to Buffy.

Fear of clowns is nothing new. Speaking of Buffy the Vampire Slayer, Xander was terrified of them; over on Supernatural, so is Sam. A survey back in 2008 revealed that every single kid they interviewed basically said, “Hell, no!” to clowns. The UK’s “Bestival” festival canceled its clown theme in 2006 because people said they were scared of them. 2016 had a weird rash of both fake and real evil clown sightings all over the place, and people were freaking out. There are probably cave paintings of evil clowns decimating villages somewhere out there. Psychologists have all kinds of explanations for it; just Google “why are we afraid of clowns?” and you can read all about it. 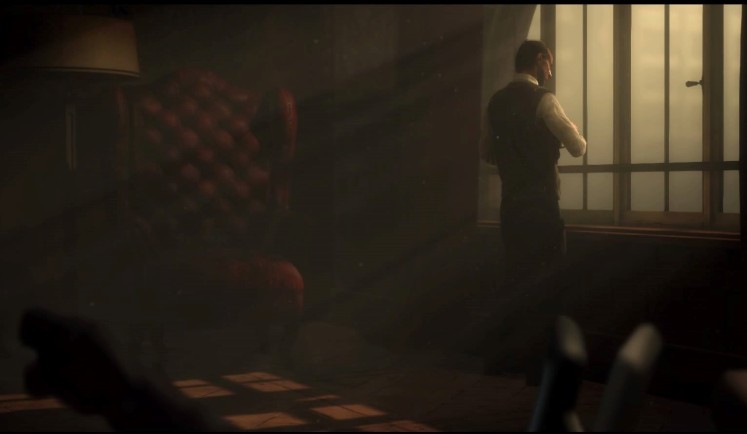 I have my own little clown-related anecdote. When my eldest (Thing 1) was around three, his grandmother gave him a clown doll. As clown dolls go, it was the least scary one I’d ever seen. It was knitted, and while you could tell that it was meant to be a clown, it only vaguely looked like one. The next time I tidied up his closet, I found the clown doll buried in a corner under a pile of stuff. I figured it was just a coincidence that it ended up at the bottom of the pile; he liked to toss things into the closet. So I put everything back where it belonged, and the clown doll went on a shelf.

The next time I cleaned his closet, I found the clown doll buried in a corner under a pile of stuff. Message received. I chucked it in a box.

Back in February, Thing 1 finally picked up a PS4. I was still holding steady with the PS3, because I just didn’t use it much. My hierarchy has always been 1) PC – 2) Xbox – 3) Playstation. Xbox took precedence because I hated the Playstation controllers. (The size of the controller and the placement of the various buttons was an issue for me.) Not long after, Thing 1 told me I needed to play Until Dawn. He didn’t explain why, precisely, but he told me enough to pique my interest, and I decided that this constituted a valid excuse to finally get a PS4 myself. (The PS4 controller is a vast improvement, btw, and I use it a lot more now.)

*Tiny spoilers for Until Dawn ahead*

I loved Until Dawn. It really made me feel like I was in a horror movie. I even found myself making horror-movie-like stupid choices, even though I knew better. I knew that doing this was exactly the kind of thing that would make me scream, “Don’t do it, you idiot!!!” at a character in a movie… and I did it anyway.

But the real ohshit moment came during one of Dr. Hill’s little psych evals. I ended up texting this gem to Thing 1: “HOLY FUCK how am I supposed to choose between clowns and scarecrows???”

That choice messed me up. I assumed that the game would use my choices against me later, and who the hell wants to have to choose whether you’re going to be menaced by evil clowns or evil scarecrows?! They’re BOTH BAD.

Even stick-figure cowgirls know clowns are bad. (West of Loathing) 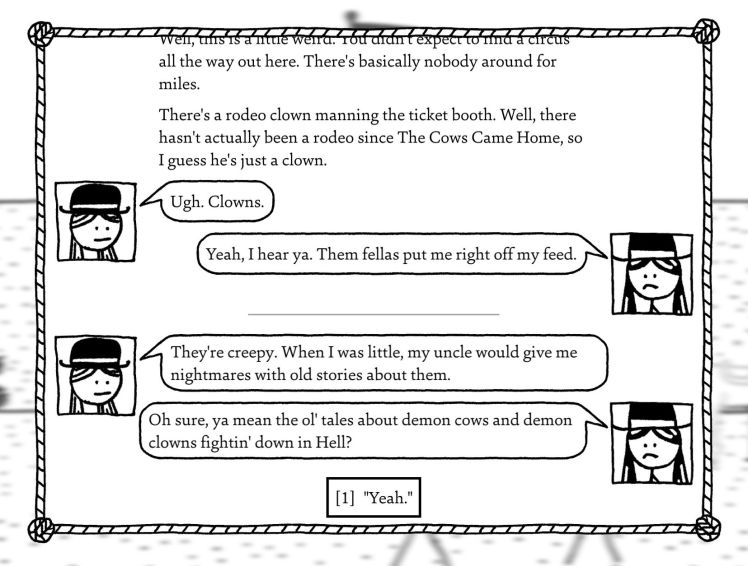 (So are walking trees and people in creepy bunny masks, but that’s a whole ‘nother story.)

The spousal unit won’t watch horror movies. Like at all, ever. I, on the other hand, have seen more horror movies than anyone should probably ever watch. I thought Tim Curry did a hell of a job in the TV version of IT (and really, when does Tim Curry not do a hell of a job in anything? Tim Curry is the shit.) I really wasn’t crazy about the miniseries as a whole, though. So, hell, yeah, I’ll see IT–which is, to this day, still my favorite Stephen King novel. But I’ll watch it at home with the doors and windows all locked. Heck, I’ll watch it in my office with that door locked and a baseball bat close at hand. Just in case.

Because clowns are fucking evil.